STAYING AT THE CATTERY AS A FUTURE BREEDER IN 2015 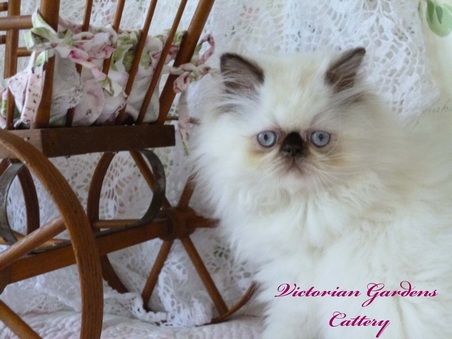 Our Chocolate Hollyhock, a rare extreme faced Chocolate Tortoiseshell Persian
July 2, 2014:  When Holly's last siblings left on June 15th, we decided to bring down Diamond's kittens to the Toddler Room so that Holly would not be so lonely.  We set up a fence in the middle of the room for Diamond's babies.  Well, that did not last long as Holly really wanted playmates.  So within the week, Holly became the big sister to all four of Diamond's babies.  She is a great big sister.  She cleans them like they are her own babies and plays very gently with them. We are watching Holly's development to see if we can possibly show her in November, 2014 at a CFA show.  Right now her blue eye color is starting to darken.  We are just waiting to see how her mature teeth will come in.  You will be able to see pictures of her in the future, modeling for Southern Charm by Veronica.  She is going to make a terrific mother in 2015.