Adopted by the deBeixedon-King Family in Norfork, Virginia 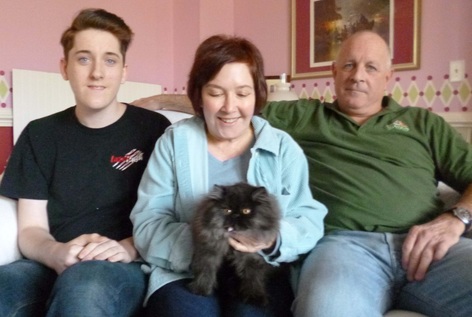 Black Diamond Cartier, an Extreme Black CPC Persian with his new family Kyle, Dianne and Neil.
Right from the start, Cartier was the most easy going little boy.  He was a  gentle kitten.  He got his sweet personality from Little Miracle, his father.  He got his long beautiful coat from his father and those all to famous cheek wings from my girl's line on Miracle's side.  Cartier loved to play with his sister Aspen when he was at the Cattery. He really is such a cutie pie. How did Cartier get his name you ask?  Well Dianne, his new mother, has a lot of experience in making fine jewelry.  So Cartier got his name from the world famous Jewelery Company, Cartier.  Dianne showed Cartier in his first CFA Cat Show in Norfork, VA on February 7, 2015 in the Kitten Class.  You can see his show pictures and his show videos in our CFA Show Gallery. He did great that day ... just like a champ.  Dianne did an excellent job of grooming him for his show.  We had to register his legal name prior to the show and Dianne picked Black Diamond's Cartier.  I really thought that was so classy and sweet and a great tribute to his mother, Diamond.

On November 29, 2014, Cartier went with his new family, the deBeixedon-King family,  to live in his new home in Norfork, Virginia.  Cartier entered a large family that is well experienced with dogs and cats having over 35 years experience. Dianne just loves cats and there is no such thing as too many.  The family has a 11 year old female boxer named Honeybee.  Then there is a very large Maine Coon cat named Nike, and sibling 3 year old Brown Tabby Persians, Romeo and Bukki.  The family has an old historic three story house so the cats run up and down two separate staircases chasing each other. Besides the fur babies, Cartier's parents also have twin 17 year boys, and a 21 year old daughter all living at home. One of the sons, Kyle, posts pictures of Cartier on his Facebook page or on our Facebook page. Here are the pictures and comments that Dianne and Kyle have sent in via email or on Facebook.

November 29, 2014 from Dianne, via email: "Cartier cried most of the way to Norfolk. He did not seem overly distressed. Kyle and I sat in the back seat with him. We stopped in Suffolk and got a bag of litter. So he is all set. Once we got him in the bedroom with food, water and toys he relaxed. He ate and drank water. And the went into the carpeted cubby we had for him and he went to sleep. He is up now and playing. Purring too. We will keep you posted. He certainly can express himself! He is so cute. I am already attached to him."

November 30,2014 from Dianne, via email: "Hi Susan,Cartier slept in the large enclosure in our bedroom for safety. In the morning I took him up to our third floor sewing/family room which is 30 feet by 20 feet, so he plenty of space to play and run around. Of course, the cats Romeo, Bukki and Nike were kept downstairs.  The third floor room has a tall cat tree which he played on and took periodic naps on the couch (red velvet). He was very comfortable. One of us was with him all day so he wasn't lonely.  Earlier this evening I let Romeo "sniff" while Cartier was in the enclosure and Romeo took to him immediately. Romeo has been very protective even and has stood guard all evening by the door."

December 3, 2014 from Kyle, via Facebook: "He's terrific. The other cats are really warming up to him. Cartier is such a cutie and a total sweetheart." "We adore him. He has the cutest purr and an adorable meow. So cute!! I especially love his silver-black fur."

December 10,2014 from Dianne, via Facebook: "Cartier is doing fine.  He sleeps in our room at night in the middle of the bed.  I still have him in our bedroom during the day, if I am at work. He has toys, litter, food, water and a 3 foot tree in the bedroom.  When we are home we bring him down to the kitchen/family room to hang out with all of us.  We are gradually giving him access to one room at a time.  Romeo is his best buddy.  Romeo hangs out with him and follows Cartier around the rooms.  The other cats don’t bother Cartier, but they have not warmed up to him as much as Romeo has.  The dog is more “oh well another kitty”. Cartier seems happy and gets lots of attention. I have been conscientious in giving the other cats extra attention as well, but their routine has been disrupted so I think it will take a little more time. Cartier is a real cutie and one of the things I like is that he is vocal, if he wants you to play with him or if he wants to know where you are.  We have pictures and we will send you some."

January 21, 2015 from Dianne, via email: "Cartier is doing very well.  Buki (tabby female) was the last to accept his presence, but now they play chase up and down three flights of steps and he is now considered one of the fur family.  He is really growing; loves sleeping on the highest shelf on the trees; and is a very busy kitty."

February 26, 2015 from Kyle, via Facebook: "It's so hard to see his cute little face because of how black he is! But here is the cutest black boy Persian in the whole entire king family: Cartier"

March 7, 2015 from Dianne, via Facebook: "While Romeo is watching out the window, Cartier is checking out the tub. The cats are very busy in the morning." "Cartier's best buddy looks out this special window every morning waiting for the squirrels to run across the roof."

April 15, 2015 from Dianne,via email: "He has a routine in the morning – where at 5:30 am he jumps on Neil, slides down and cuddles in his arm – purring, of course, loudly. Once he feels that we are awake – off he goes to watch birds with Kabuki and Romeo from the bathroom window. The other thing that Cartier likes to do is curl up with Romeo in the bean bag chair – no other kitty is allowed to do this by the way.  He is a beautiful black and certainly is growing. His tail is beautiful."