You can view more Cattery pictures, photo shoots and videos of this kitten by going to
Pansy's Nursery 2014. 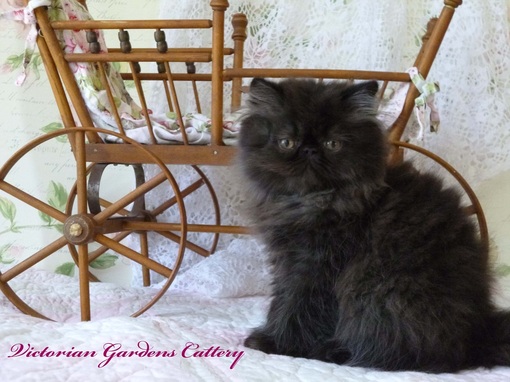 Saffron was the only kitten born to Pansy and Willie.  Saffron grew up with Primrose's babies that were born 11 days before her.  Saffron is such a sweet heart. This boy is going to be a lap kitten.  He would run up to me when I would come in the room and would touch my pants or leg wanting me to pet him.  Pansy always has such sweet kittens.  Add Willie’s outgoing and friendly personality kittens and you have a great personality.  He also is a beauty.  He looks like he will have his mother’s deep copper ears.  He is extremely cobby.  Pansy’s babies are highly sought out for their personalities and beauty. Pansy and Willie blessed us with another sweet and loving kitten in Saffron.

On June 16, 2014, Janessa came to pick up Saffy to take him to her new home where he will be the companion to Janessa.  Before picking up Saffy, she had come to visit him on June 1st.  This really has helped the transition and we recommend this to all parents.  Janessa does not have any other cats or children.  Previously, Janessa had a Flame Point Himalayan who was 12 years old when he passed in December, 2012.  Janessa spent the appropriate time grieving her loss and doing extensive research on various Catteries in the Carolinas.  We are happy that Janessa chose our Cattery for her new kitten.  We couldn't be happier with this match.

On July 24, 2014, Janessa contacted the Cattery and asked us about verifying the sex of Saffy.  We were in shock to hear that Saffy was not a female but a male.  Saffy's sex was misread by me and by our Vet and Saffy's Vet.  I am still trying to wrap my mind around that.  It appears that one testicle has now dropped down in the sack and one still needs to drop down.  We are hoping it drops down in the sack before his neuter that will be right before his seven month birthday.  Janessa will be living in Wilmington then and will be going to Dr. Williams at The Sound Cat. Dr. Williams has a knack of being able to manipulate a testicle into the sack if it is not there at the time of neuter.  Janessa was fine with Saffy being a boy since she said she had put down on her Kitten Application that she preferred a boy.  So it has worked out for Saffy and her mother which makes us very relieved and happy.

You will find out how Saffy is doing in his new home with Janessa below along with pictures of Saffy as he grows up. The comments from the families are arranged from newest to oldest.

June 18, 2014:  "Hey Susan! Saffy and I are having the best time together.  As I am sure you already know, she is an absolute momma's girl and a lover.  She follows me from room to room, she sleeps with me almost the entire night and she sits right on my desk while I work.  I took the attached picture early this morning.  She has a great appetite and her bowl is about half Royal Canin and half Young Again.  She is super smart just like you said.  I was in the laundry room with the door almost closed (I don't want her to get behind the washer or dryer).  Of course she isn't strong enough but I could see her trying to pull the door ajar with her little paw.  She knew instinctively that she could use her paw to open that door!  I am sure she will be opening doors and cupboards soon enough. Her appointment at the vet is today.  I will send you over the paperwork for your files.  Thanks for blessing me with such a sweet baby!  Janessa"

June 16, 2014:  "Well Saffy seems to be adjusting nicely. You were right about the wet food!  She is a smarty pants.  I took the wet food away and she just went for a full helping of dry food.  She has also used the litter box a couple more times and had her first bowel movement which looked good.  She is running around like a crazy lady right now having a grand old time.  She really is sweet and so loveable.  She loves to be rubbed all over."