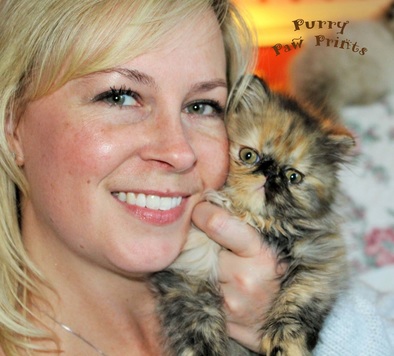 Schann Westbrook with her newest baby, Penelope, an Extreme Face Female Black Tortoiseshell Persian.
﻿Penelope is one special little kitten.  She was a small baby to begin with. She is a character and a lap kitten all wrapped up in to one.  She is absolutely precious.  She has her daddy's Willie's nose.  She got her lap kitten personality from her grandfather, Camelot, on her mother's side.  She got the impishness from her mother's side.  She loves to eat and boy does she love to play.  I was so happy when Schann and her daughter Summer came for the day just to play with the kittens at the Cattery.  Schann is no stranger to the Cattery as she adopted Tabitha, a Primrose and Willie baby, in the summer of 2014.  Tabitha is a gorgeous Doll Face Black Tortoiseshell Persian from the rare all Tortoiseshell litter.  Schann is a photographer, Purry Paw Prints, and loves to come to the Cattery and play and take pictures of the babies. Well, on this particular visit on November 22, 2104 and unbeknowest to them ahead of time, they both fell deeply in love with Penelope.  You can see the photographs they both took of that day on the website in "The Feline Photography Of Purry Paw Points".  I think when you see the photographs, you can see the progression on how love was inevitable.

On December 20, 2014, we hand delivered Penelope to Schann in Cary, North Carolina.  Schann's household consists of her husband, Curt, Savannah who is 19, Spencer who is 14 and Summer who is 10.  They also have 2 sweet Cavalier King Charles Spaniels named Turbo and Otis.  And of course there is gorgeous Tabitha, a Black Tortoiseshell Persian,weighing in at 11.2 lbs.
December 20, 2014, via email: "I would say she is settling in quite nicely! She is very content and we already are commenting on how different she is than Tabitha when we brought her home. Tabitha hid under the dresser for a while and Penelope just crawled right up and made herself at home! She is the loudest little purrer! And talk about wanting to be pet and held it is so cute! Thanks again Susan! She is just perfect!"

December 21, 2014, via email: "Here she is snuggling with me this morning - do ya think she looks happy?!?!! LOL!" "She is the sweetest little thing I swear! She is really outgoing too - she is not shy at all! Poor Tabitha is not having any of it right now. She did hiss at her when they saw each other so everyone is still separated. I think in time it will be ok - the dogs are naturally curious but are not as hyper as when I brought Tabitha home. Penelope loves to be cuddled we are loving her!"

December 23, 2014, via email: "Penelope is such a little talker!  And her meow sounds so cute and funny we just laugh!  I will definitely give her a kiss and a hug from you!!" " She [Tabitha} was very curious about the blanket and smelled it for a very long time!  As soon as she sees Penelope she perks up and acts curious but then puts out a hiss.  So we will keep trying."

December 23, 2014, via email: "She is very vocal and runs right up to us when she sees us.  She put her two front paws up on my leg tonight and looked straight at me and cried until I picked her up - so cute!"

December 25, 2014,via email: "Penelope had a great first Christmas and her sister let her get up on the play station today - more pics later today! " " I still can't believe I was lucky enough to get her.  I was surprised when you said you were letting her go!  I have a few more cute pics that are on my camera and i will send those to you tonight when I transfer them to my computer.  Tabitha kept following her around today and was super curious. Penelope is unfazed by it all and has really settled right it amongst all of them!"

December 27, 2014, via email:"Just wanted to let you know that I changed the vet appt to today at 11:30. Everything went great and he once again gave you flying colors on breeding such wonderful babies! He said she looked perfect! Boy was she feisty though - LOL! She did not want to be held down and it took 3 of us at one point to do it. She is just a smidge over 3 lbs now and is perfect! Just wanted to let you know :0)" "Yes we were all giggling about how feisty she was - poor thing!  I did give her a quick bath last night but with just the baby powder scented shampoo.  She tolerated it pretty well and she let me blow dry her.  Funny thing is when I turned the blow dryer off she was purring!  He did pull a fecal and didn't see a thing!  Everything went very well!"

December 31, 2014, via email: "Take a look at this video from this afternoon. Tabitha really wants Penelope to play but she is still a little unsure! So cute!"  "Yep that is her happy dance that she does!  She gets real excited and starts running around and doing that it is funny!  No more hissing!  Penelope is still a tad bit resistant but it will come.  She has free reign now because everyone is being so good with her.  She sleeps a lot with my oldest daughter Savannah and then sometimes Summer.  Tabitha floats around as well but is usually sitting on the fireplace in my bedroom waiting for me to wake up :0) I thought the same thing about Tabitha's size - I bet he is 3 times as big as Penelope! She is a big girl. I'm curious as to how much she weighs now - she feels so heavy compared to Penelope.  But all in all everything is going well and everyone is happy happy!"

January 15, 2015,via email: "You were absolutely correct! She tries to steal our food all the time - she would not stop trying to go after this popcorn tonight :0) We love her so much! Hope you are well Susan!" "So cute!  She is still pretty little - and such a lover!  And a talker!"

January 16, 2015,via email: "We backed off a bit because I caught Tabitha biting her.  It was as if she was playing but became aggressive so their time together is supervised still."

January 19, 2015,via email: "This is usually what I wake up to every morning! LOL! Tabitha making herself comfortable. The last few days have been good with Tabitha & Penelope. The aggression/playing? has calmed way down - I even caught her licking Penelope - so cute!" "Yes I think progress is being made every day and I'm so happy about that!  Penelope is awesome!  I know I can explain to you how different their personalities are and you get it - both are sweet but - Penelope OMGosh!  She is such a sweet, affectionate smart kitty it's unreal!  True lap kitty for sure!  We adore her! "

March 16, 2015,via email: "So speaking of cats and food...... We have a food thief on our hands!  Lol!  Penelope has jumped up on the counter twice in the past week and stolen a whole pork chop - yes it was almost bigger than she - and a portion of a steak.  So funny!  We obviously caught her and took it away but man she was chomping as fast as she could when she knew we were coming for it!  Lesson learned - do not leave freshly grilled meats on the counter unattended.....not even for a second!  :0)"

March 26, 2015, via email: "I love it!  Yes Penelope looks very cute in it!  I did hate to see Tabitha's beautiful coat go too but she had gotten some mats and she is not a big fan of the grooming.  The dogs were going crazy when I brought them home today because they didn't recognize them it was funny!  :0)"

﻿﻿April 3, 2015, via email: "Here is another cute shot of my baby. Since she got the hair cut she loves getting under the covers in the bed. Scared Curt to death one day because he didn't know she was doing it! LOL"﻿﻿