Pansy's adopted Persian and Himalayan kittens from 2013 are featured on this page, as well as comments and pictures that have come from their adoptive families.  Families are free to send pictures or give updates on their babies.  We have a unique and special relationship with most of our adoptive families. We feel very blessed that our kittens have been adopted by these very special families. Enjoy their cute and sometimes very funny stories. You may click on the picture to see additional pictures of the kitten or view the slide show provided to see the kitten when it was growing up at the Cattery.  You can click on the families pictures to enlarge the size of the picture.

You can view more pictures and videos of this litter by going to
Pansy's Nursery 2013.

ADOPTED BY FOREVER FAMILY:  The Trummers in Raymore, Missouri

Jared is my love bug, my sweet and precious baby.  He melted my heart the day he crawled up on my lap and went to sleep there.  In all my years as a breeder, I have never seen such a laid back, easy going kitten as Jared is.  He was the largest of the litter and matched weight with the largest of the male kittens that our Cattery has had.  He is very solid and heavy boned with a nice extreme face.  He has huge eyes that will just get bigger as he matures. We can't wait to see his eye color as he matures.  He looks amazingly like his father, Willie.  He loves to be laid on his back on your lap and have his chest rubbed. It usually only takes one or two minutes and he is fast asleep.  What a joy he is.  He will be shown in CFA shows in the near future.

On July 25, 2013, Pansy's precious lapcat Jared was placed in to the arms of his new parents, the Trummers, in Kansas City, Missouri.  The beautiful photos above were taken professionally by Haub Photograph, Lee's Summit, Missouri.  Terry and Victoria have a special story of how Jared was put in their lives.  For the last year and half, Terry had been deployed to the war zone overseas.  That left Victoria alone with her two precious cats, Blossom and Petunia.  (Are you picking up on the names yet?)  Well ... I will just let Victoria tell the story, if she doesn't mind:
In an email dated April 21, 2013 -

"I think it is kismet that I found your website. I have just lost both of my precious kitty girls within two weeks of each other. I am so heartbroken. My Himalayan, Blossom was 14 or 15 years old and had PKD. The last four years were very difficult for her with this terrible illness. It was time to let her go. Then it was just me and my Petunia. She was a cream and white persian, just one month shy of 10 years old. She had HCM. I found her two weeks to the day that I lost Blossom, in her favorite place, my closet amongst the shoes. It has been so sad so I decided to do something that would make me feel better and went on the computer to look at pictures of persian kittens. Googled Persian catteries, and you and only your website came up. The videos of the kittens are charming. My husband is deployed in the middle east. He is also enjoying them. He will be home in June. He's been gone since January 2012. Back to Kismet-- My maiden name is Russo, my cats are named after flowers, and I love all things Victorian. Kismet. We are so impressed with your efforts to improve the Persian breed by using DNA testing and ultrasound. They are terrible diseases. My husband and I hope to some day adopt one or two of your babies. You will be hearing from us with an application. Thanks for listening to me. Vicki"  It still brings tears to my eyes as I read her first email to me.  What heartbreak all at once with her husband gone for a year and a half.  I feel so blessed that I could put such a special baby in their arms to love once again.  All three are blessed to have each other. We look forward to hearing more about Jared, about his life with Vicky and Terry and about his future CFA shows.  You can read more about Victoria's story of living with a HCM cat on our HYPERTROPHIC CARDIOMYOPATHY (HCM) & The Persian & Himalayan Controversy page.

ADOPTED BY FOREVER FAMILY:  KATHY FROM SANDSTON, VIRGINIA
Our Hyacinth is a beauty and getting more beautiful everyday.  As a baby, boy did she have a coat factor going on.  Her whole face was covered in a big coat.  She is solid and heavy built with a nice large head, short legs and extreme face. We look forward to seeing her eyes darken as she matures as well as her Seal mask.  She is looking more like Willie as ever day passes. She will be shown in CFA shows.  She is a sweet kitten as all Pansy's babies are.
On July 20, 2013, Hyacinth went with her sister, Camellia, to live with their new mom, Kathy in Sandston, Virginia. Kathy will be showing Hyacinth in CFA shows in the future. They will join a 11 year old rescue cat that Kathy adopted as a stray. Kathy was devastated earlier this year when her 8 year old Tortie Point Himalayan, Lela, suddenly died of kidney failure. Lela had been diagnosed with HCM, the year prior. The kidney failure more than likely was caused by the HCM. She was very glad when she found a Cattery like ours that was scanning all their breeders for HCM.  We are also glad that Kathy found us. We look forward to seeing new pictures, videos and updates of Hyacinth and her CFA show debut.

ADOPTED BY FOREVER FAMILY:  KATHY FROM SANDSTON, VIRGINIA
Camellia is a sweet and very pretty doll face Seal Point Himalayan.  She is the only doll face that Pansy and Willie produced in this litter.  She loves to play with her side kick Joel.  In fact, their personalities were a match.  She loves to play and yet loves to be cuddled.  She comes up to you and cries to be picked up and loved.  It is like she can not get enough of you.  She is precious.  She is a mixture of a lap cat and play kitty.  She is going to have an amazingly beautiful coat.

On July 20, 2013, Camellia went with her sister, Hyacinth, to leave with their new mom, Kathy in Sandston, Virginia. They will join a 11 year old rescue cat that Kathy adopted as a stray. Kathy was devastated earlier this year when her 8 year old Tortie Point Himalayan, Lela, suddenly died of kidney failure. Lela had been diagnosed with HCM, the year prior. The kidney failure more than likely was caused by the HCM.  She was very glad when she found a Cattery like ours that was scanning all their breeders for HCM.  We are also glad that Kathy found us. We look forward to seeing new pictures, videos and updates on Camellia, our sweetheart.

ADOPTED BY FOREVER FAMILY:  THE TRACY FAMILY FROM WILMINGTON, NORTH CAROLINA
Joel is a handsome extreme faced Black CPC Persian.  His personality is wonderful.  He is the life of the party.  He got all his litter mates involved in play.  He is a very happy and fun little guy that all his siblings love and gravitate to. His personality is a mix of lap cat and play cat.  He loves to be loved, snuggled, petted and held.  He also just loves to play.  He loves to talk also.  You could not ask for a better kitten than Joel. 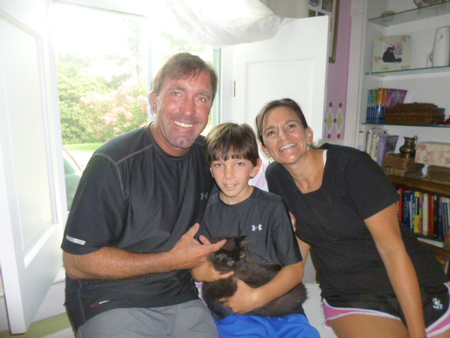 The Tracy Family with Maxwell Joel, Black Persian.
On July 20, 2013, Joel was adopted by his forever family, the Tracys. When the family came to see the kittens and make their pick, it was Joel for sure.  They loved his personality.  He is their only fur baby at the present time so he will be spoiled and loved. Their 8 year old son was very smitten by Joel and had already named him Maxwell.  We look forward to the pictures and updates on our sweet boy.

Staying at our Cattery as a Future Breeder