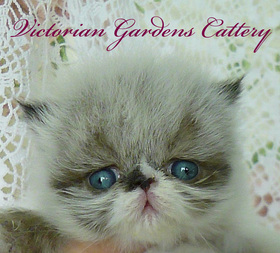 Victoriangdn's Precious Blue Bell
Welcome to Hydrangea's Nursery at Victorian Gardens Cattery.  In Hydrangea's Nursery, we feature all her new Persian and Himalayan litters, including their photos, videos, parents, and pedigrees.  You will find all the latest news about her babies and their growth on "Our Cattery Blog".  We usually are blogging several times a week during our kitten season. 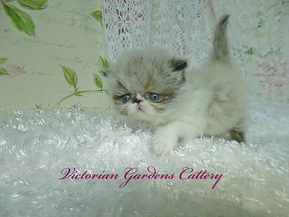 Rare Female Extreme Face Blue Point Bi-Color Himalayan
Her babies will remain on our Nursery page and then will be made available on the Available Kitten Page. Please enjoy watching the videos and looking at our newborns.  Each day the babies change.  It could be their color changing, or their size, or their eyes opening.  It is always an exciting time at the Cattery when the babies arrive. We have ordered this page with the most recent videos and pictures at the top then going to Day 1 at the bottom.  Enjoy Hydrangea's newborns as much as we do. If you are interested in being on the wait list for one of our litters, please fill out the "Kitten Application" and return to us.  More information on our policies are found on the Prices and Policies Page. Serious only inquiries please. 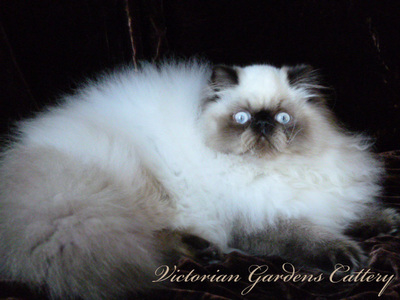 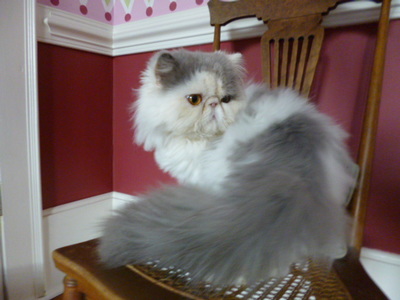 Playing at the Cattery Video
Produced by Shellsea Huntington
July 27, 2015

We have just released to Youtube, our latest video of our kittens playing.  The video was filmed, edited and produced by Shellsea Huntington, one of our Adoptive Families.  Enjoy watching Blue Bell, Ziggy, Leo and Magnolia playing with D'Bird toy.  They love, love, love this toy.  You can watch the video by clicking on the below  link:

On June 13, 2015, Schann Westbrook and her daughter Summer, came to the Cattery to enjoy the day playing with the four litters (Pansy, Hydrangea, Holly and Diamond's babies). Schann, Summer and her friend and I had a great afternoon together.  Schann has provided us wonderful memories of the day.  Enjoy her special photographs from that day of Blue Bell. She was definitely a hit. You can catch the full photo shoot of four litters at The Feline Photography of Purry Paw Prints.

Well, I finally got some videos of the four litters.  I had to take them late last night when they were so hyperactive.  There are three videos.  The last one is being loaded and should be ready in a few hours.  You can find them on our Youtube Channel.  I have attached the link.

This little girl is absolutely precious.  She is all fluff.  She has her mom's wonderful fluffy coat.  She will be a light weight like her mom.  Pictures just do not do her justice.

Hydrangea's baby is doing great.  Hydrangea's baby is now 3 1/2 weeks old.  I have already started to wean her.  Today she went potty in the litter box.  Hopefully by the end of the week, she will be well on the way to being weaned and potty trained.  We have enlarged to the space in Hydrangea's area since most of her gang are now out and about walking. It looks like Hydrangea's milk is going low so I am stepping up and feeding more.  It will be nice when all the gang is weaned and potty trained.

Hydrangea's beautiful Blue and White Bi-Color Extreme Faced Female Himalayan is 14 days old today.  She was born via C-Section.  She loves to eat and overeat. She just started playing today on her 2 week birthday.  If she sees me or hears me or smells me enter the Nursery, she starts crying for her milk.  Her mom, Hydrangea, a Seal Point Himalayan, is an excellent mother but has three other mouths to feed.  So we are helping Hydrangea by supplemental feeding some of them.  The other three babies are 11 days old and are our Chocolate Hollyhock's (Holly's) babies.  On Day 3 of their lives, we gave Holly's babies over to Hydrangea to nurse and love.  Holly is just over one year old and this was her first litter. She stills acts like a kitten.  She just was not the best mom this time around so we did this in order for her babies to have the very best care.  Hydrangea loves them like they are her own.  For her, they are her babies.   In about a week, Hydrangea's daughter named Blue Bell will start the weaning process and potty training process.  You can view the YouTube video we have just published by clicking the link below.

We have made it through a very busy week at the Cattery.  I was hand feeding both Hydrangea's baby and Holly's babies round the clock.  Holly was not being the greatest mom, so Holly's babies were given to Hydrangea to nurse and take care of. Hydrangea had to slowly build up her milk production.  Hydrangea has definitely gotten her stride in the last two days.  She is now nursing the group without too much intervention or too many supplemental feedings from me.

As many of you know, Hydrangea had her babies on April 22, 2015, via C-Section.  I have had a very hard and exhausting last five days.  We lost three of Hydrangea's beautiful babies within the first 36 hours due to pneumonia. I, personally am putting the blame straight on the shoulders of the new local Vet who gave them to me chilled in a plastic bowl with a old bath towel. No heating pad at all.  I touched them and they were all cold. The Vet had refused my help when I first got there with Hydrangea, nor would he let me come in to watch.  They did not even give me the babies until they gave me Hydrangea, 45 minutes after the C-Section.  So the babies probably  were chilled for 45 minutes. Needless to say, I will NEVER be using that Vet again!!  When I got them the babies, I immediately rushed them out to my incubator with my heating pad and plugged it in to the inverter in the car and drove home with the heater on full blast.

I am devastated by the loss of these three precious lives. I have never had this happen to a litter before.  My poor Hydrangea didn't even get coherent till 12 hours after the surgery and did not get full use of her back legs till 24 hours after the surgery. I would definitely say that this Vet did not have a clue about cats or Persians and Himalayans. It is obvious he gave her way too much anesthesia.  I did everything possible in my arsenal for those babies when I got them home, but it still was not enough. I try my hardest to never loose any babies for any reason.  After nebulizing with antibiotics and giving them antibiotics internally as well as sub-q fluids and aspirating them, poor Hydrangea and I had to watch them gasping for breathe for hours.
The black and white bi-color girl extreme face of the litter was outstanding. Probably one of the best the Cattery has ever produced. The solid cobby extreme face boy was outstanding also.  The two strongest went down first.  All that is left is the Himalayan.  When a newborn baby kitten gets chilled, their intestines and stomach can not absorb.  I didn't know that.  I fed them throughout the day and they kept screaming and then they all went quiet. I didn't know why they were screaming. I just assumed they were hungry. They were on a heating pad and warm even though Hydrangea was not with them.  She was out of it and could not move her back legs.  They stopped eating after the second feeding.  I could not really get the Himalayan to eat. He just wanted to nurse and Hydrangea did not have any milk.  That saved his life.  Since their birth, I have been hand feeding the Himalayan 24/7, round the clock. On Sunday, the baby started to nurse on Hydrangea but she still runs out of milk quickly. I have her on special medicine to help with her milk production and it is working.  At first I had  to put the baby on the nipple with some formula on the nipple to get her started but now most of the time, she finds the nipples on her own. It has gotten better and Hydrangea is now starting to produce more milk.  I am still hand feeding the baby but with more time in between feedings.  Hydrangea feeds till her milk is gone.  She is an absolutely excellent mom, just like her mom, Peony was.  I felt so sorry for her when she knew her babies were dying.  It was a nightmare to watch.  I felt so helpless and I am sure she did too.  The Himalayan girl which I have named Victoriangdn's Blue Bell tried to find her siblings and was going all around the birthing bed looking for them.  It was all heartbreaking.  She is a gorgeous baby.  Every day she gets more breathtaking to me.  Toy and Hydrangea are definitely a good match because they have created some outstanding babies. You can see her picture above in the candids that were taken today.  It is looking like she is a Blue Point Bi-Color Extreme Faced Himalayan.  I would have said a Blue Cream but that is not what Toy and Hydrangea can produce together.

Hydrangea's babies are now here.  It did not go as planned but then what in life does.  Today was Day 66 or 67 of Hydrangea's pregnancy and I was starting to get concerned.  Around 8 a.m. this morning, she started to show signs of the first stage of labor.  Around 9:30 a.m., she was starting to have hard contractions.  At 10:45 a.m. she was exhausted from pushing and no baby had showed up.  I was starting to worry that a baby might be stuck in her.  I called our new  local Vet about 15 to 20 minute drive away.  Hydrangea was wisked away for a C-Section and I was left to wait it out in the car.  It didn't take long before they showed me the first baby.  It was a very large rambunctious black Persian.  We stayed at the Vet till around noon and then had the short drive home.  I don't think Hydrangea would have been able to delivery these babies on her own.  They were just too big for her smaller frame.  I think one baby is the third largest born at our Cattery. Hydrangea's non-pregnancy weight is usually around 6.12lbs. So she is the smallest of all my girls.  Most of the girls range from 7 to 8 lbs.

Hydrangea was still under the effects of the anesthesia all afternoon and into the evening. Unfortunately, Hydrangea can not walk on her back legs though she is trying.  She is showing no interest right now in her babies.  She just is interested in trying to walk but keeps falling on her back legs.  I have been syringe feeding her babies all afternoon.  Around 5 p.m., I solicited my precious Pansy to come in and be with the babies and clean them and comfort them.  She is always willing.  She is my go to mother in a pinch.  Hopefully Hydrangea will feel well enough tomorrow to start cleaning and feeding her babies.  Hopefully she gets full movement back in her back legs.

Toy and Hydrangea had the following babies:

Once Hydrangea is feeling better and is taking care of her babies, we will get a video and some pictures. It looks like an all nighter of hand feeding babies tonight.