I came to know Donna Riggins on May 7, 2015, when she contacted me through the Cattery's website.  Donna relayed to me the heartbreak she had experienced through the HCM disease in her two Persian cats.  She stated: "I'm writing to thank you for your awareness of this terrible disease and for going the extra mile to keep all your babies healthy. I can tell that you truly love them and care what happens to them after they leave your care. Wish all breeders were like you!!!"

With Donna's permission, I worked at contacting Fuzz's breeder by email, Facebook and phone to inform her of Fuzz's HCM diagnosis. As expected, the well known South Carolina Persian breeder never contacted Donna directly after the email, even though she said she would. The breeder never contacted me back after I relayed the details of the diagnosis and the name of the parents.  As of the date of this writing, the Persian breeder has never even contacted Fuzz's Cardiologist to verify the diagnosis.

It is so sad that Persian and Himalayan breeders world wide are putting their heads in the sand about this disease and pretending it does not exist.  What is truly frightening about  this particular well known Persian breeder it that most of her breeding stock is directly related to Fuzz's father.  Without providing HCM ultrasounds on Fuzz's father and the related offspring breeders on a regular basis, there would be no way to know which breeders to take out of the breeder program so that the HCM gene is not being passed down to the offspring kittens. It is notated that Fuzz's mother has already passed away. There would be no way to determine if she had HCM.

Currently, we have no genetic markers to determine how a Persian or Himalayan cat is getting HCM.  Everything is theory at this point. When the genetic markers are found, this will then allow a HCM DNA test for Persians. Without the DNA test for HCM in Persians, there is no way to know if or which non-HCM breeders are passing the gene down to their offspring, unless offspring from a particular breeding gets diagnosed with HCM.  I have authored a very important HCM article about these potentially scary non-HCM carriers. Every Persian and Himalayan breeder can provide HCM ultrasounds on all their Persian and Himalayan breeders to determine who has actual HCM that possibly may be passing it down to their offspring. Then these Persian and Himalayan breeders can be retired from the breeding program.

If you have any questions, please feel free to contact me directly. Susan Youngman 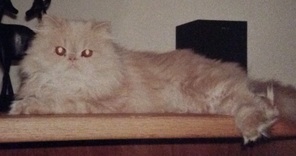 It all started with a small orange ball of fur that crawled into my new cat carrier.  I had seen an ad in the newspaper for Persian kittens and I happened to be looking for a kitten for my new one bedroom apartment.  I had gone to the lady’s house to pick out a female but when I opened the door of the carrier, a very self-assured male kitten walked into the crate and plopped himself down as if to say “Ok, I’m ready – let’s go now.”  It didn’t take long for me to realize that I had gone there for him to pick ME.  His name would be Toby.

We all think our cats have something that no other cat in the world has, and Toby was no different.  He had all the personality and charm to make him special, even amongst other pets that we added to our family along the way.  At 5 years old, during a routine checkup, I remember the vet making a comment while listening to his heart.  I’m sure it was something of a side note, like “Hmm, he has a heart murmur.”  I remember being upset at first, but the vet didn’t seem concerned and Toby didn’t seem bothered by it, so it slowly faded from concern.

Toby stopped eating for some reason.  He loved to eat, so something was up.  After several tests and vet visits, a specialist found a suspect spot on his liver.  Surgery was done and thankfully, it was benign.  However, the anesthesia from the surgery had exacerbated the heart condition we’d thought was nothing to worry about.  It was during this time that we first heard of Hypertrophic Cardiomyopathy or HCM.

After the surgery, the surgeon had installed a feeding tube into his stomach so that we could push food into it and try to get him eating again.  The specialist didn’t seem to have much confidence that he would recover.  However, this little boy wanted to live as much as we wanted him to.  It was a long, hard road but by several months later, Toby recovered fully.  Every day from then on was Atenolol, Enalapril, and Plavix - very expensive, and I was paranoid about everything he did – but we still had our baby and would do anything to keep him well.  In fact, he ended up thriving for the next few years and life was good.

Toby developed some sort of allergy which was making him itch and caused his face to swell.   As we tried everything to find the cause, and the vet did several tests, the stress was more than his little heart could take.  He slowly went downhill from that point on.  He developed a blood clot in one of his legs, causing paralysis.  We tried in vain, hoping that he would make another miraculous recovery but it was not meant to be this time.  Leaving my heart truly broken and devastated, Toby passed in early 2012 at almost 15.  Everyone, including our vet, says it was a miracle he lived this long. 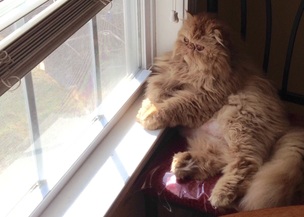 Looking at photos on the internet and still missing my boy, I came across a picture of a Persian.  It was the spitting image of Toby.  At the time, I was not looking for a replacement for my sweet boy but just wanted to send a note to the owner of the cattery because she had posted a story about this beautiful little soul and how he’d come into the world.  After exchanging several emails, this Persian show breeder located near Columbia, South Carolina confided that she had a little male kitten that was not considered “show quality” but was cute and had a huge personality.  Of course, the first question I had was about the health of his heart.  We had talked at length about how Hypertrophic Cardiomyopathy had affected our life with Toby.  She assured me that she’d only had minor incidences of health issues with any of her cats and that heart problems had definitely not been one of them.

For whatever reason, the plans changed at the last minute from us picking the kitten up at her house to meeting her at a local restaurant.  She seemed honest enough and seemed to truly care about her animals, so we agreed, confident that all was well and there would be no issues.

I cannot explain the immediate attachment I felt for this little boy.  By no means could he ever replace Toby in my heart, but he was sure set on trying.   As if on cue, he immediately started “kneading dough” against my neck when I held him.  No reservations with this kitten – like Toby he was not shy.  His name would be Toby’s nickname – Fuzz.

We have yet to meet a single person who is not taken with this little showboat.  He is quite the charmer and I - even as his mother - am not immune to it.  Very handsome, social, and affectionate but yet, mischievous and curious, he never has a shortage of tricks up his little furry sleeve.

One morning, while getting ready for work we noticed Fuzz sitting in the litter box.  An immediate trip to the vet revealed that he had a urinary blockage.  She assured me that we had caught it early and that he would likely recover.  However, during the exam, something else was noted – a heart murmur.

As expected, Fuzz has recovered from the urinary blockage and we’ve had no recurrences to date.  However, a cardiologist has confirmed that my new baby has HCM.  Needless to say, we are devastated at this news after our previous experience with Toby.

While we hope that giving him all the same love and special attention we gave to Toby, we can have a long life with Fuzz, there are certainly no guarantees.  We will live in fear with him every single day and this dark cloud of HCM, wondering about every little symptom or sign.  It seems so unfair that we would go through this again with a different kitten 15 years later.  How can this be??? However, we are convinced that it is meant to be that he’s with us to make his life special, no matter how long or short it may be.